Drift is a music video collaboration with LLMoves' music artist DZill and LLMoves Artistic Director Lindsey L. Miller.
Night of Dreams is a short fashion/dance film featuring dancers Lindsey L. Miller and Natayu Mildenberger. The gown is designed by Zachary Alexander, and the artistic direction and camera work is by Chris Dreams.
Plastic Ocean and Plastic Bags are film collaborations with Iron Rose Productions made alongside LLMoves' participation in the WestFest Dance Festival 2018: All Over Westbeth and the gallery One Planet One Future by artist Anne de Carbuccia. These films are artistic representations of the site-specific dance work PLASTIC OCEAN choreographed by Lindsey L. Miller, which sheds light on the plastic epidemic happening in our oceans today.
Pigeon is an experimental short film conceptualized, produced, and performed by Natalie Deryn Johnson and Lindsey L. Miller. The film is a fusion of the fashion and dance worlds, featuring designs by Sho Konishi. The story expresses an exploration of transformation, reflection upon ideal versus reality, set to a score by Jeanann Dara.​
• Official Selection in Cucalorus Festival
• Semi-Finalist in Los Angeles Cinefest
• Winner of PBS's channel THIRTEEN short film festival REEL 13 - Aired on November 12, 2017

Seasonal Existence is a duet choreographed by Lindsey L. Miller to the original piano compositions of Craig Schlatter. The short film was created over the course of a year throughout the elements of all four seasons. The choreography depicts a couple growing together and weathering the elements of nature and their partnership. The man and woman duo, performed by Zachary Alexander and Kara Walsh, represent a paradoxical relationship in which the two parts are seemingly contradictory yet inseparable at the same time. As the piece develops, the struggle remains, but the pair finds a mutual understanding and acceptance of the imperfections and magnificence in their relationship shown symbolically with the seasonal progression. The costumes are by one of our performers, Zachary Alexander, and the film and editing work is by internationally published dance photographer and filmmaker Lucas Chilczuk. The project was produced under the New York based dance/media company LLMoves.
• Movies by Movers Festival selection for Spotlight On: The Great Outdoors
• Filmmaker feature for New Dance Cinema Festival
• Finalist for La République’s Online Video Contest DANCE& 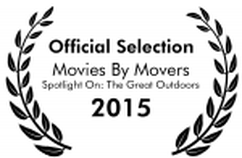